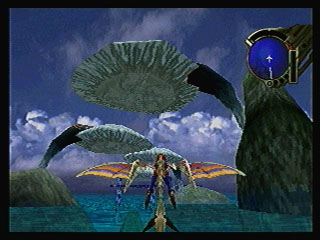 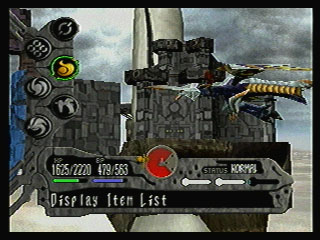 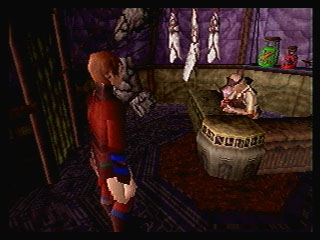 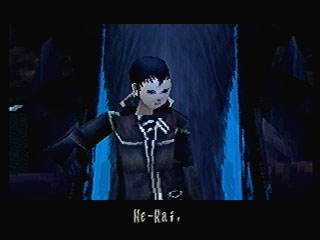 After a few months' delay, Sega finally released what I consider one of the true RPG masterpieces of the Saturn, Panzer Dragoon Saga. On my opinion, this is the only game which is "on the same league" as Dragon Force, in terms of quality.

One of the aspects I liked the most of the Panzer Dragoon series is the environment on which they take place. It is unique and imaginative. I was glad to see it again, especially since now I could fly where I wanted, instead of following a set "path." The ruins, the plants, the monsters, the machines, all are so different that they make me want to wish I could live in the "Panzer Dragoon universe." And for a few days, I almost could.

The play mechanics during battles take a little bit to get used to: you have to wait for the gauge to fill before you can attack, you move around the enemy to position yourself correctly, you find and exploit the enemy's "weak" spots, and so on. After a while, they turn out to be a lot of fun (and different from any other RPG I played). The only aspect I never really mastered was where to press the button to position yourself. I got really angry when I wanted to move one way and, by mistake, went the other way right before the enemy attacked, without a chance to correct it. I got especially angry when Azel said "Ne-Rai".

When you enter the towns, Edge, the main character, gets off the dragon and can explore the environment freely. The analog controller really excels in cases like this. Thank you, Nintendo! The analog controller, however, seemed rather loose when going through the menus, where a digital controller would've felt better. Also, at the towns the characters say different things depending on whether they are far away from you or near you, the time of day, and so on. A very nice touch.

The graphics, for the Saturn, are very good. I have come to reluctantly accept the fact that in most cases Gourad shading would take too many computer resources from the main processor, and it's better to use that power for other things. What this all means is that at some times, like inside the towns, the graphics look pixelated. The town of Zoah looks very nice during the night, though.

The game also features many secret objects that you can optionally find. This makes the game more fun, deeper, and longer. The dragon hologram was "cute". I also enjoyed searching for all the D units. You got a very cool effect when you found all the units. It made it worth it going through all the trouble of finding them.

Speaking about the secrets making the game longer, many people will complain about the game being too short. It took me 27 hours to win the game. And remember that I spent a few hours looking for secret stuff and being lost. Well, there is not much I can say about this. It did feel a little short. I don't think this should keep you from buying the game, though. It is a great game while it lasts. Plus you can play it over and over (like I will).

The plot, what makes or breaks an RPG, is very good. I like the fact that Edge is an ordinary guy, instead of a prince or the descendant of a hero. I also liked that you didn't know if Azel was a good or evil woman. In the same way, if you thought that Craymen, the villain of the story, is "completely evil," and have no doubts in your mind that you want to kill him, you are in for a surprise. Near the end of the game an event happened that made me realize that it's not as simple as that. This is a refreshing change from all the one-dimensional villains we have seen in the past, and closer to what "real life" is.

The only aspect of the plot that I didn't like, and ruined the suspension of belief of the game, was the fact that the characters referred to the person who was playing the game at the very end. Could you stop doing that? Don't you know that we play video games to escape?

By the way, the game is in Japanese, with English subtitles (with the exception of the beginning and the end, which is in the "Panzer" language). This doesn't bother me at all. Some people complain that Sega should've hired voice actors to translate the voices into English. I don't think that would've been wise. It would've meant spending a lot more money, resources, and time in order to translate this game. And considering the state of the U.S. Saturn at the moment, they probably would've cancelled the game. And this game deserved to be brought here.

In conclusion, even if this game had some flaws (very few), it is a wonderful game. This masterpiece would make a nice addition to your Saturn library.