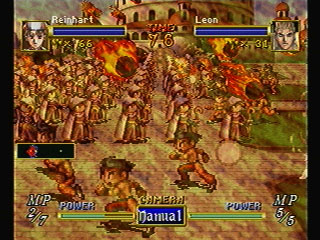 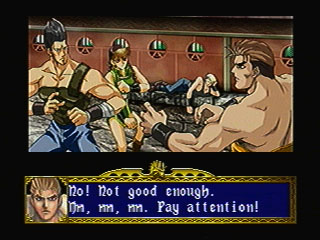 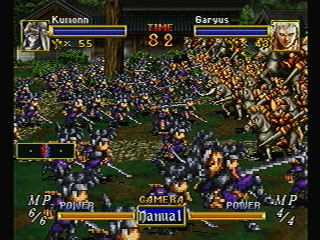 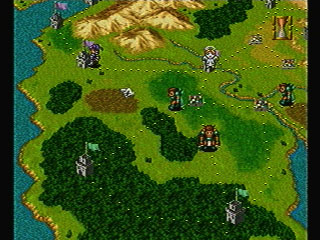 This Strategy/RPG is a very special one to me. It was the best video game for the Saturn until Panzer Dragoon Saga came along. Now I'm torn between the two. This game was originally developed by Sega of Japan, and Working Designs brought it to the U.S. Working Designs is known for the quality of their games' packaging, among other things. Therefore, that was the first thing that I noticed when I opened the game. At the time, it was a while since I played a Working Designs game, and I almost forgot about how great their CDs and manuals are. There is a picture, in color, printed on the CD itself (of course, I almost don't see the picture because the CD spends most of the time either inside the box or inside the Saturn). The manual is also in color, printed on very high quality paper, and has "metal" on the logo of the game. I almost didn't want to turn the pages of the manual, for fear of messing them up. My copy also came with a sticker for the RAM cart of the Saturn. I stuck it on my RAM cart, and, really, it looks much better than the sticker that came with the RAM cart originally.

Of course, all this is just an added bonus. Let's go to the game itself. On it, you assume the role of one of 8 generals who live in the kingdom of Legendra. You then engage on a series of battles in order to unite the kingdom and fight an evil force that is awakening, the dragon Madruk. What makes the game exciting is that it can have up to 200 soldiers per battle (100 on each side). You control the battles by issuing commands, telling your troops that you want them to advance, retreat, and so on. Your general can also cast magic spells. If both generals are still alive after all troops are dead, they engage in a duel. By the way, you can only control whether your general will engage in a duel or not. Once the duel begins, you can't stop it or control it.

Let me get this out of the way first: the only aspect I didn't like about the battles was the pixelization in many of the warriors. I hate pixelization. And that could've been easily solved by drawing the sprites at a higher resolution and scaling them down, as necessary. Everything else was very good: the taunts at the beginning of the battles, the fact that you can command more warriors as time goes on, the ability to choose the strategy and issue commands in real time, the fact that you can control the camera, and the spells. The menus in this part of the game are also easy to use. Of course, it took me a while to feel like I knew what I was doing. However, this happens to me in every RPG.

It would've been better if I could be able to make a general retreat from one battle and still be able to send him/her to another battle in that series. I had to get used to the idea of "fighting to the death". One way to get around this limitation was this: when I fought a strong adversary, I first chose a weak army to fight it. When it was almost defeated, I retreated. Then I finished the battle with a strong army, since the opponent was now weak.

Between battles, you go to the overhead map, where you choose which generals and armies you will send to other castles (that's how you conquer the continent, by taking over castles). The map looks very good, and it had a subtle scaling. Some times I found myself moving across the map just to see it scale. I found it also easy to navigate. The only problem I had with it was that the computer chose automatically the direction of the generals' movement when they are defeated. However, doing it in any other way would've presented a user interface problem that couldn't have been easily solved without interfering with the gameplay. The only solution I could think of, setting up a dialog box, might have been worse than the solution that existed.

When an important event happens on the game, you see a plot screen (in most cases you just see the text at the bottom of the screen, with no picture). They are very good. They are colorful, have a high resolution, and do a good job of explaining the plot. Of course, I wish they would've had more of them. I did like more the screens of Phantasy Star IV, since I believe the different sizes, shapes, and camera angles of the panels expressed more "emotion" than the ones at Dragon Force.

Once in a while, you automatically go to the "administrative affairs" section of the game. On this section you talk to the prisoners to try to convince them to join your forces, talk to the generals to know if they are happy, and so on. The design of the user interface during that section of the game is very well thought out. This is true especially in the color scheme used (a very soothing transparent blue) and the navigation controls, which are quite easy after you get used to it. Eventually, as you get more generals, you get tired of the routine of giving awards and talking to generals, convincing the prisoners to join you, and searching and upgrading the castles. However, this complexity is also present in every strategy game. You just have to bear with it. The manual does a good job explaining all this, by the way.

The main characters of the game are great. I like the fact that they have different personalities and react in different ways to the events around them. Throughout the game, I also enjoyed that they became allies as time went on, and you get to know their background stories. I usually felt sad that I had to fight and defeat them before they joined me, although that happens in every Strategy/RPG. However, in the Shining Force games for the Genesis the battles seemed to me more "justified" than in this game.

This last paragraph leads me to the fact that it was a pleasant surprise for me that Teiris joined my forces (when I played as Wein) without fighting her. Of course, if it would've happened the whole time the game would've been a complete walktrough. :-)

It was also funny that Gongos fell in love with Teiris and that she didn't fall in love with him. This was very realistic. It has happened to me many times...

The secondary characters are good, for the most part, and add "spice" to the game. I liked Rudger (from Wein's army) especially. He was funny. Vlad, the vampire, was intelligent and compassionate. I also admired the love he felt for Sierra. The two characters you find at the Shadow Tower at the north are also very good. I did not like, however, that in several cases some characters look exactly the same. This is confusing. Since the style of the art is like the one in Japanese animation, the designers could've easily solved this problem by just changing the hair color of all the characters that look the same (except one, of course). Hey, they could've had blue hair, green hair, white hair, purple hair, pink hair, and orange hair (there is orange hair in real life, you know).

The music, in one word, is wonderful. Before I heard it, I expected the battle music to be the "upbeat" type that is present in just about every other RPG (and you eventually get sick of, after hearing it over and over). However, when I heard the music that was present, it was very well arranged, and much better than the one I would've chosen if I would've designed it myself. Now that I know better, I wouldn't have chosen any other kind. Anyway, the "upbeat" feeling is accomplished by the crowd sounds in the battles.

The plot is good, and it develops well. I usually knew where to go and what to do next. The only exception was determining which generals went to each shrine. The solution, by the way, is this: Teiris, Reinhart, and Gorgos go to the South Shrine, Mikhal, Leon, and Junon go to the East Shrine, and Wein and Goldark go to the North Shrine.

Also, the plot is actually "different enough" when you play the game with different rulers. This increases significantly the replayability of the game. So far I have won the game with Wein, Junon, Mikhal, and Leon. Although the basic plot is the same, you learn about the personality and motivation behind the main character's actions. This is unlike the game Phantasy Star III for the Genesis. It has four different endings, depending on who you marry. I started playing it for the second time, and after playing it for a while I got the feeling that almost everything was the same, so I stopped playing. I didn't get that feeling with Dragon Force.

Since I don't want to give away the ending, I will just say that its battles were very exciting and it has some good character development. I thought it was rather easy until I played with Leon. For some reason, it took me several tries to win the game. In all the other times, I could go through the entire ending sequence without loosing.

To finish, this is a very high-quality game, and I enjoyed it very much. I will always remember it. And since I bought a Dragon Force watch from Working Designs, I will remember it even more. Dragon Force is, really, one of the best video games I have ever played.